I began my scientific career in 2000, investigating methods for formal representation of computerized clinical practice guidelines. As part of my doctorate, at the University of Pavia (Italy), under the mentorship of professors Mario Stefanelli and Silvana Quaglini, I designed and co-developed a guideline-based decision support system named 'The Guide Project', which combined guideline decision support with the power of clinical workflow management systems.

Initially, I have been focusing on the pathologies of 'Stroke', 'Hypertension' and 'Heart failure'. I later applied the same methodology and tools to 'Cancer' and 'Amyloidosis'. The Guide Project is the topic of several publications and has been mentioned multiple times in the book Clinical Decision Support: The Road Ahead by Robert A. Greenes *.

The Guide platform has been deployed in the Trentino county (Italy) for heart-failure management and for the Lombardia county (Italy) oncological network for evaluating the treatment of several oncological diseases. An additional prototype has been developed - under the guidance of Prof. Giampaolo Merlini - for the Italian Network of Amyloidosis together with a web portal and an electronic system from collecting patient data across the Italian territory.

While carrying out my doctorate work, it did not take long to realize how the use of logic and semantic technologies could have been beneficial for both guidelines representation and guidelines integration with existing clinical information systems where patient data are mostly unstructured and hard to interpret automatically.

* When Greenes published the book in 2006, he was working for Brigham and Women’s Hospital in Boston. Unfortunately, Greenes moved to the University of Arizona right after I started working in Boston and I never got to meet him in person.

In 2004, I started exploring the emerging Semantic Web technologies. Towards the end of that year, I visited my dear friend Stefano Mazzocchi at the time working at the SIMILE (Semantic Interoperability of Metadata and Information in unLike Environments) project at MIT. As a result, in the following year, we co-developed Welkin an open-source graph-based RDF visualizer covered also by Slashdot.

Under the same umbrella we also co-developed Vicino, a library to perform nearest neighbor searching and clustering later incuded in Freebase Gridworks (now Google Refine). Because of this contributions, I got to know Eric Miller - at the time lead of the Semantic Web initiative at W3C and now president of Zepheira, Inc. - and MacKenzie Smith - Research Director at MIT Libraries and now Creative Commons.

I also visited the W3C offices in Cambridge for the first time. Even if limited to my spare time, the SIMILE experience has been certainly one of the most gratifying of those years and eventually the main reason why I eventually ended up in Boston.

Meanwhile, in 2005 in Belgium, I co-funded a start-up company named Medicognos with the aim of bringing the clinical information systems to the level of functionality and usability required by the busy physicians for sustaining their daily effort to ensure the best quality care for their patients and the sustainability of the healthcare system. In other words, the goal was to realize a shift from the old problem oriented medical record paradigm to a clinical knowledge and process management platform.

In September 2006, I accepted a part-time position of post doctoral research fellow at Massachusetts General Hospital and Harvard Medical School under the direction of Tim Clark, director of the MIND Informatics group.

For 15 months I held my position of a teaching assistant at the Univeristy of Pavia where I spent half of my time developing the open source Java Data Processing Framework (JDPF). The other half I spent in Boston develping Semantic Web Application in Neuromedicine (SWAN).

In January 2008, I was appointed Instructor of Neurology (full-time position as faculty) at the Harvard Medical School in Cambridge/Boston.

Since mid 2008, I also became very active in the Semantic Web Health Care and Life Sciences (HCLS) Interest Group and particularly in the Scientiic Discourse sub-task where I have been responsible for several activities including:

Since my arrival in Boston, I have been increasingly focusing on enabling personal and community-driven knowledge acquisition, curation and sharing. I explored the use of Digital Annotation for supporting the knowledge creation process.

** Annotation Ontology eventually became one of the two 'annotations models' used as input for the Open Annotation Community Group. 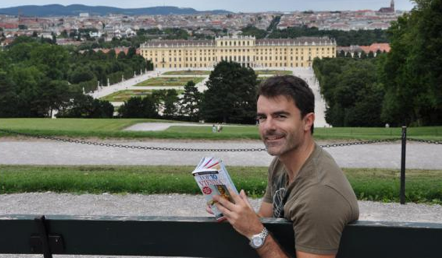 Together with AO, and in order to test AO, I developed the Domeo Annotation Tool, a web application for semantically annotating online documents.

On March 2011 I randomly met Phil Desenne (Harvard University) that, since several years, is pursuing very similar goals in the pedagogical area. We are now promoting the idea of creating a platform for implementing federated annotation within Harvard University.

Since December 2011, I am co-chairing the W3C Open Annotation Community Group whose purpose is to work towards a common, RDF-based, specification for annotating digital resources.

In 2013 I have architected and bootstrapped the CATCH Annotation Hub that, since the beginning of 2014, is serving the annotation client of the HarvardX MOOC platform.

After testing Domeo in real industial settings and following the success of the CATCH project, on January 2014 I've started developing the Annotopia Universal Annotation Hub. Developing Domeo made me realize how difficult is to serve diverse annotation needs with a single client.

Annotopia provides a pool of services for supporting annotation clients so that new annotation ideas and platforms can be experimented and developed faster and without the need for spending resources on back end technologies.

On March 1st 2014, I have been appointed Assistant Professor of Neurology at Harvard Medical School. This achievement put a seal to almost 15 years spent in academia... and certainly made my parents very proud.

During the year 2014 I also had the pleasure to participate to the Linked Data For Library (LD4L) project, a collaboration between Cornell-Harvard-Stanford that aims at delivering a highly interoperable Linked Open Data platform enabling useful cross-university resources for querying and applications.

On September 2014, we started the activity of the W3C Web Annotation Working Group, which aims at standardizing annotations for the Web and hopefully beyond it.

On February 2015, I've joined PerkinElmer Innovation Lab where I shifted my attention towards big data technologies applied to healthcare and environmental health. Research and innovation are still a big part of my work life, but the goal is now to focus in delivering innovative and industrial quality products.

I still hold the positions of Assistant Professor at Harvard Medical School and Assistant in Neuroscience at Mass General Hospital where I work on biomedical knowledge management tools.

Beginning September 2015, after several months spent designing and implementing search for one of our new big data product (PerkinElmser Signals for Translational), I began to focus on ther application domains such as High Content Screening (HCS) and diagnostics.

On February 2017, the W3C Web Annotation Working Group published the W3C Recommendations of the Web Annotation Data Model and Web Annotation Vocabulary. These represent a step forward achieving annotation interoperability on the Web and beyond.